There were 8 corrals in the full marathon. I wasn't really sure if I should line up in the 7th or 8th. I had signed up for the 7th (way back in April!), but I was a little nervous whether the other runners would be too fast for me. When I got into the corral though, the 4:25 pacer was there, so I wasn't worried anymore. She said she was going to run a 9:55 min/mile to account for bathroom breaks or water stops. Sounded perfect!

The race started right on time at 3pm. The weather was great -- around 70 degrees and sunny. Except for the wind!! The wind advisory said 25mph sustained winds and gusts up to 45! I tried not to let that make me too nervous...so, when our corral was finally released, I was just SO excited! This was finally happening!! Here. We. Go! 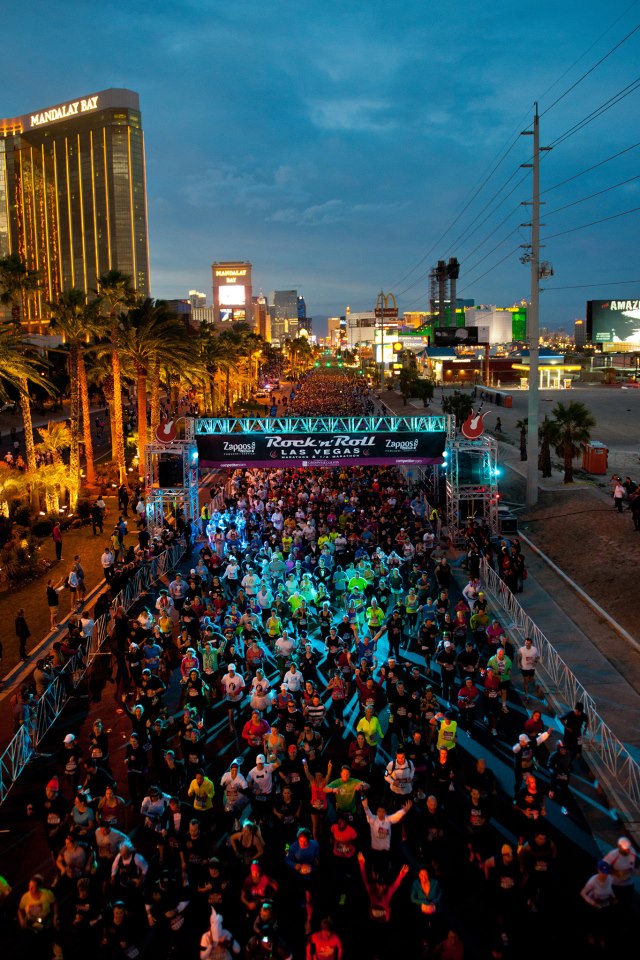 We started by heading away from the main part of the Strip for a mile before turning around and heading back down the entire Strip for 7 more miles. This part of the run was amazing. There were so many people out along the road, the wind was at our backs, it was the first few miles and everything was going great. There was so much to look at with all the big casinos! I tried not to start out too fast and really wanted to keep this part easy so I didn't burn out later. I ended up running the first 10k in 1:02.

At mile 9, we headed away from the Strip and the wind started to pick up. Sometimes it felt like no matter which direction we were going in, the wind was against you. My legs were already feeling heavy by mile 10, which I got a little nervous about, but I tried to keep my mind focused on just a few miles at a time instead of that I still had 16 miles to go. I past the halfway point in 2:13.50. 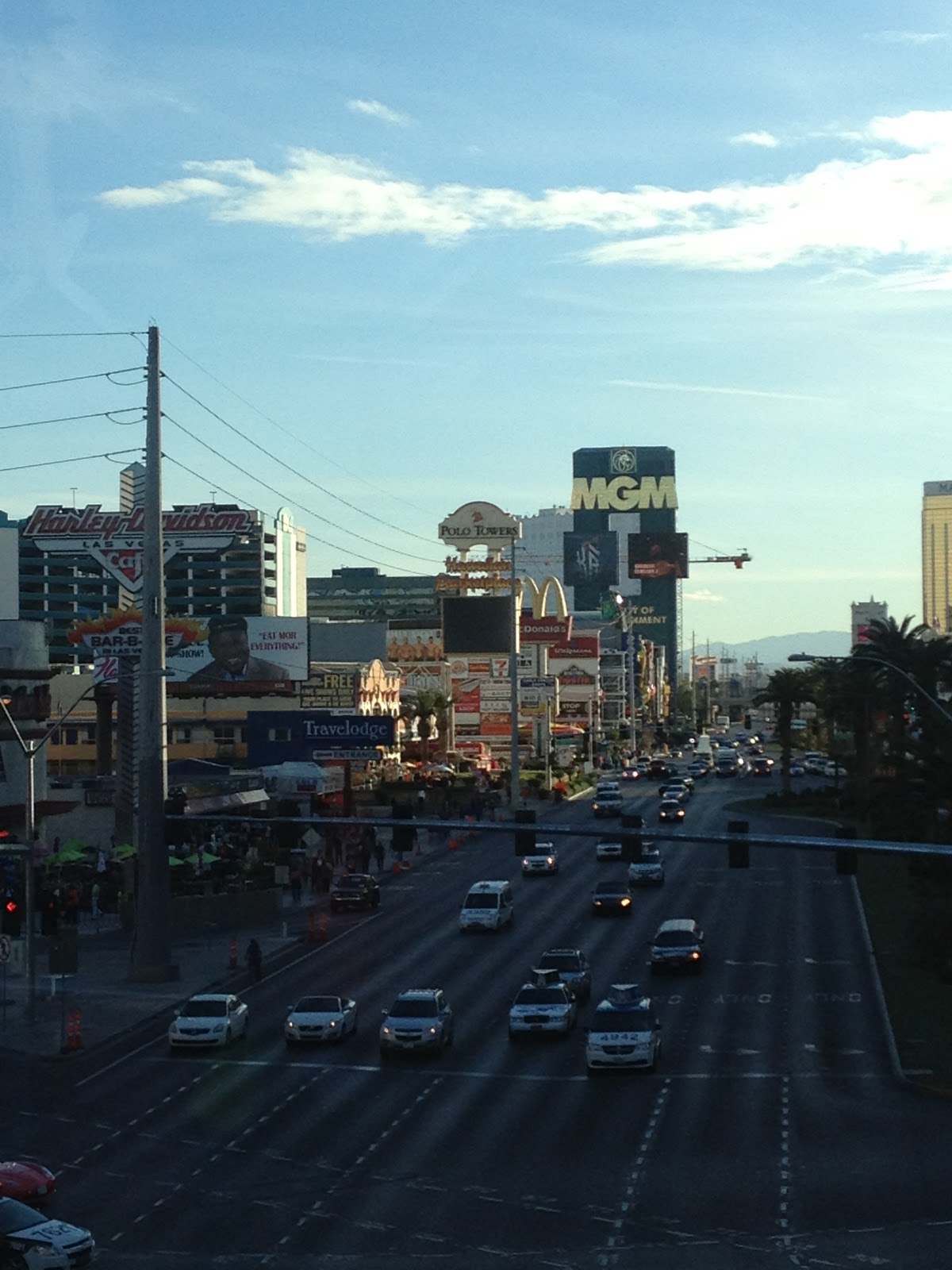 One of the most difficult parts was miles 13.5-16, which was a long stretch into the wind. It really took a lot out of me. It was an out and back, so I did my best to push the pace again until mile 20. These miles were also tough because it was super dark by that point and there weren't too many people out since it was kind of an empty/commercial area.

The last 6-7 miles were all against the wind, and seriously so tough! My legs were tired from running so many miles already, and pushing it against the strong winds. At this point, it seemed like everyone around me was walking. I only let myself walk the water stations, and then kept pushing as hard as I could once I past by them.

Along the run I ate a power bar, and a few ShotBloks. I had water at every water station. I also decided to take some salt with water near two different stations to make sure I didn't cramp or maybe help the fatigue. Not sure if it did anything, but I didn't have any issues either. I passed mile 23 with 30 minutes to finish under 4:30. I knew I wouldn't quite make it but I decided to push it as hard as I could to see how close I could get.

The final 2 miles were back on the Strip, and it was great to have the crowd support again! One of my favorite spots on the route was running through the Freemont Street Mall area. SO many people, good bands, bright lights...just an all around fun atmosphere!

The last couple miles were alongside the half marathoners. The marathoners had just a small lane since there weren't as many of us. With so many walkers at this point in the race, I had some trouble sometimes getting past people, but I did my best to keep pushing it all the way to the end. 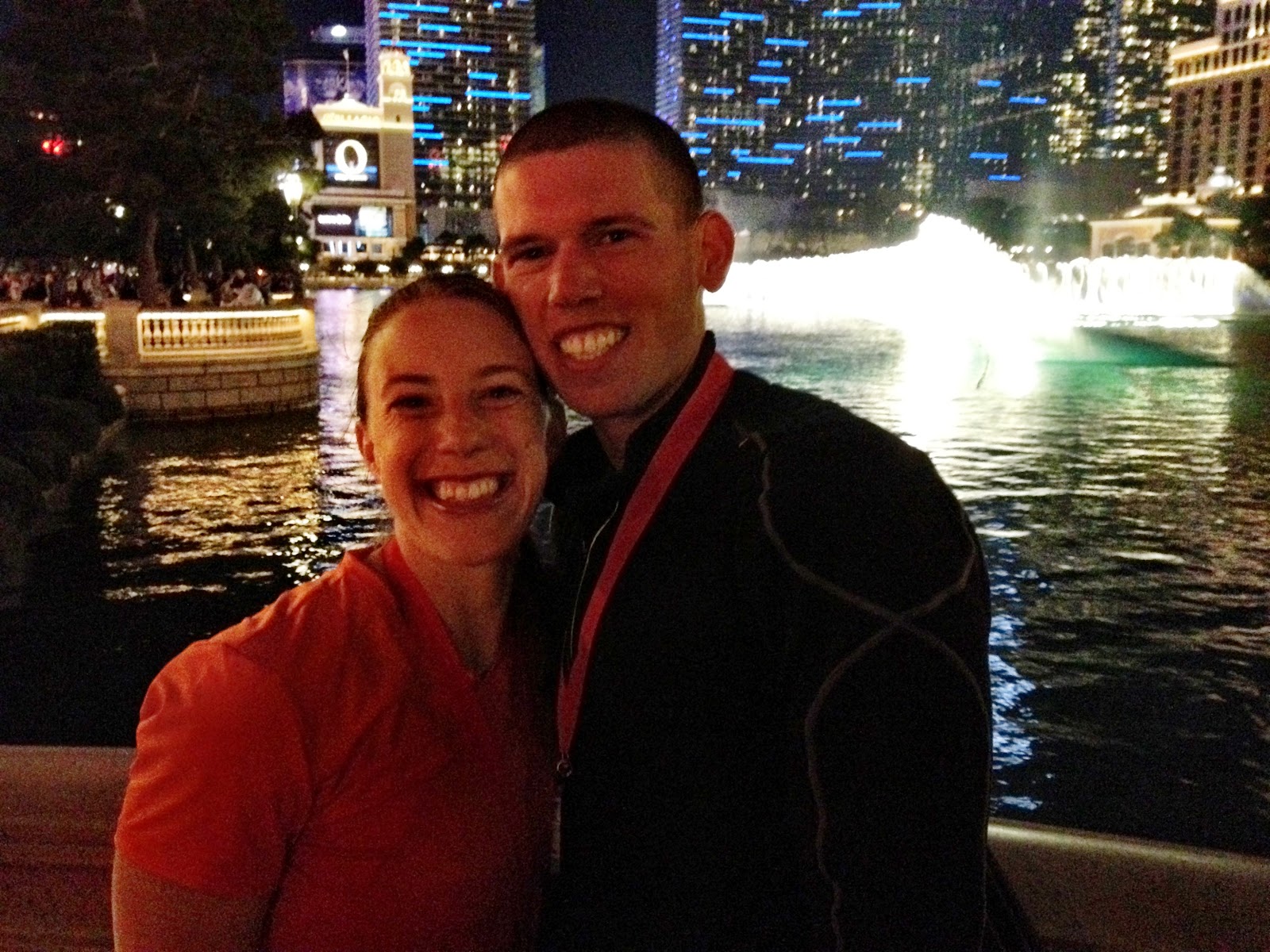 I was hoping to finish a little faster than this based on my training, but I think the wind took some  energy out of me. I also think for me, doing a night race was difficult. I found it harder to stay focused in the dark (especially since I don't listen to music). Walking so much the day before probably also didn't really help -- something to consider for my next race. But overall, I am SOO excited and proud of myself for finishing my first marathon! I think I kept a fairly consistent pace throughout and had so much fun! I was smiling almost the whole time even when I was in pain.


Thanks to everyone for your support. It is so incredible to finally cross that finish line and call myself a marathoner. It was less than two years ago when I decided to train for my first half marathon. I was so worried about how my knees would hold up, or if I would really be able to do it. I truly never thought I would one day run a full marathon! I think there will be another marathon in my future. And I'm already looking forward to it.
Posted by Kristen L at 9:46 PM

I'd love to hear your thoughts! 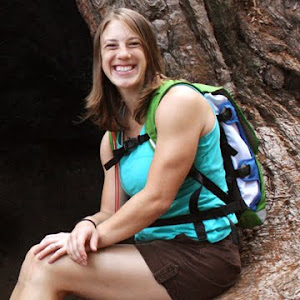